Evolution of the Internet in Bangladesh 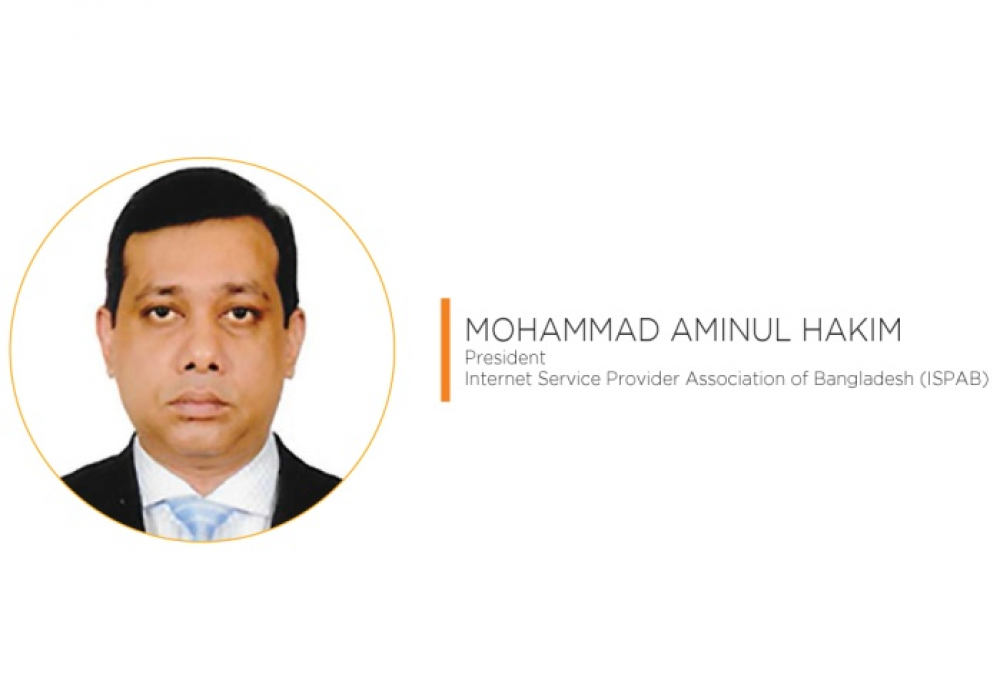 Evolution of the Internet in Bangladesh

Like Rome, the current posture of the Internet in Bangladesh was not built in a day! It took almost three decades of hard work, passion, and dedication to come to today’s shape. Meanwhile, since the early 90’s when this long journey was kicked off, the world had witnessed a number of events from ‘Shattering of Berlin-Wall to Launching of Bangabandhu Satellite’ that actually changed the path of human history. Along with all those events, another silent struggle was going on behind the spotlight--the Internet revolution in Bangladesh.

That journey was not as simple as climbing 25 steps in 25 years or as a relay race where you can pass the baton to your next teammate after crossing a certain distance. Apart from the progress, there were also false starts, wrong steps, opposite forces, retreats, failures, and even dead-ends. All those up-climbs and down-falls are an integral part of our history of the Internet. A major part of this generation and young professionals cannot even imagine how tough a battle their predecessors had to fight to give them the ultimate comfort of hi-speed internet. Waiting 30 minutes for a simple image to download or sparing one hour to attach a document may sound like fairy-tales to the generation who are used to browsing at a speed of 10 to 100mbps. So, as an eyewitness and a participant of that old school, I feel a sort of responsibility to make the youngsters aware of how every phase of the internet was developed by placing brick after brick, building block after block, and devoting year after year. Imagine you need to spend BDT 2 per Kilobyte of data to send an email with a maximum size of 2 Kilobytes.

I know it is hard and even impossible to think while you are reading this article on your LED monitor or the screen of your smartphone. This is exactly what you would have to experience if you were one of the few users of the offline email era that started in 1993 and lasted till early 1996. Let’s not dig into the technical details as those are not relevant today. But there is no way we ignore 1993 because the history of the Internet in Bangladesh truly began in that year with offline emailing. Now, we will press the fast-forward button to reach the halfway mark of the year 1996. On the 6th of June in 1996, one of the most significant milestones of our national Internet history had been laid. Information Services Network (ISN) Limited had launched the first-ever internet service using VSAT. At the current time, you may know VSAT (a very small aperture terminal) as a technology that represents another option for Internet connectivity in extremely remote areas and distant field locations. But throughout the mid-90s and early 2000, it was the only technology to provide Internet service.

Throughout the period a handful of Internet service providers emerged in the market with dial-up Internet service. Usage charge was BDT 3/ minute and the monthly rent of 64kbps VSAT was USD$ 8,000. Bangladesh Telephone and Telegraph Board (BTTB), which is now renamed as BTCL, had entered the scenario of dial-up Internet in 1999. It was then the only telephone operator in Bangladesh. So, naturally, it could gain remarkable market share and command over the private sector ISPs. Having around 25,000 subscribers, it emerged as the biggest threat to private Internet service providers. However, private-ISPs could ultimately sustain to emerge as a full flagged industry later on. Bangladesh got a unique identity in cyberspace while having been authorized to use ‘.bd’ as its first-ever CCTLD (Country Code Top-Level Domain) in 2000. This domain was initially being maintained by BTTB and is currently being administered by the ‘Ministry of Posts, Telecommunications and Information Technology. Meanwhile, the demand for high-speed internet was mounting, and ISPs started upgrading the existing network infrastructure.

As a result, some of the ISPs started deploying their own overhead copper wire, and some even deployed Hybrid Fiber Coax. By the end of 2001 some links went up to 6 kilometers and speed touched the 8 Mbps mark. At the same time, radios also appeared in the market to connect the remote places. With all those progress in hand, one major question was still to be answered. How the mass people who don’t have computers would access the Internet? That was answered partially by the Cyber Cafés. Cafés became popular throughout the cities and towns all over Bangladesh. By the end of 2004, a large number of urban people came under the umbrella of Cyber Cafés. In the meantime, those Cafés started extending their Ethernet to the user premises acting as a local ISP. Illegal local ISPs started mushrooming since then and it is a big challenge to stop them despite the governments’ introduction of Category A, B & C ISP licenses. Now, come to the question of synchronization.

Service providers were then operating isolated from each other. As a result, the utilization of bandwidth and latency was high. So, the need for a sort of interconnectivity between the ISPs was felt strongly. To address the issue, BDIX (Bangladesh Internet Exchange) was established in 2004. BDIX was set up for peering of ISPs among themselves for the purpose of routing the domestic traffic within the country, instead of taking it all the way abroad. It ultimately resulted in a better quality of service (reduced latency) and reduced bandwidth charges for ISPs by saving on International Bandwidth. The year 2005 was one of the most remarkable years in the development of the Internet in Bangladesh. In that year, optical-fiber-based connectivity was introduced for metropolitan cities. Internet speed increased dramatically after replacing copper cables with optical fiber. The second remarkable development of 2005 was the introduction of mobile Internet in the form of GPRS/EDGE. In 2005, the mobile network was covering almost every part of Bangladesh. So, after the introduction of mobile Internet, all of a sudden most of the people came under Internet coverage, thanks to that pre-existing infrastructural benefit of mobile operators. The following year (2006) turned into a game-changer after Bangladesh got connected with SEA-ME-WE 4, an optical fiber submarine communications cable system that used to carry telecommunications between the countries of South-East-Asia, Middle-East, and Western Europe. Bangladesh was connected with that 18,800 Kilometres long cable on 20th May 2006. SEA-ME-WE-4 has a faster rate of data transmission at 1.28 TBPS against its predecessor SEA-ME-WE-3's 0.96 TBPS. The SEA-ME-WE-4 provides far higher data transmission speeds intended to accommodate the increasing demand for high-speed Internet access in developing countries.

The cable uses Dense Wavelength Division Multiplexing (DWDM) technology allowing for increased communications capacity per fiber and also facilitating bidirectional communication within a single fiber. Here comes the ILDTS Policy of 2007, which was one of those wrong steps of our Internet history, which are still pulling us backward. The then non-political government launched the ‘International Long Distance Telecommunication Services (ILDTS) Policy and created IIG, IGW, ICX, IPTSP, and NIX licensing. However, that policy adopted without any real feasibility studies and expert opinions caused permanent damage and imbalance in the ICT sector. As a result, the next democratic government amended this policy in 2010. The SEA-ME-WE-4 brought rapid growth of Internet bandwidth in Bangladesh. People began enjoying high-speed Internet. However, high-speed Internet brought the dangers of cyber security. Customer complaints about malware, phishing, email spam, DDoS, and other cyber-attacks increased drastically. Customers believed it was the ISPs' job to clean up the mess! There was no organized group to handle cyber threats and help ISPs. In this situation, in July 2007, a group of industry colleagues came forward voluntarily to form an incident response team, BDCERT.

It provides incident handling, information sharing, coordinates with ISPs, and collaborates with international CSIRTs to ensure internet security. In 2009, the government had issued three WiMAX licenses, only two went online. Accepting the reality, they were bound to move to LTE, as WiMAX is now an element of history. In the same year, Nationwide Telecommunication Transmission Network (NTTN) came on the scene as a result of the previously adopted ILDTS Policy to get rid of the overhead fiber jungle and provide a common backbone to Active Service Network (ANS) operators. Though the ultimate impact of those 5 (in practice-2) NTTN operators is debatable, it was at a minimum, a curtail milestone of Bangladesh's Internet history. Meanwhile, in 2008, IPTSP services were launched in the country. Despite getting connected to SEA-ME-WE-4 in 2006, a major headache of the ICT industry still prevailed. There was no redundancy (alternative) to manage the crisis that may arise due to the failure or maintenance of that submarine cable. That long-anticipated redundancy for SE-ME-WE-4 had come to the market in the form of International Terrestrial Cable (ITC) when BTRC issued 6 ITC licenses in 2012.

In 2013, Bangladesh had witnessed another significant development in the ICT sector, when 3rd Generation Mobile Communications (3G/LTE) was launched in the country. It was in fact delayed 3 years because of the 3 years long bargaining between the government and the mobile operators on the issue of license fees. It is difficult to determine who actually won, but the people of Bangladesh were definitely among the winners! Users from all district towns can now able to access 3G services; though covering the whole of Bangladesh is still a long cry. The second Submarine Cable (SEA-ME-WE-5) was activated in September 2017. The cable landing station is set up in Kuakata, which will serve as redundancy and boost Internet traffic up to 1,500 Gbps. It also reduced our dependency on terrestrial cables of India. In February 2018, 4G license was awarded to 3 mobile operators by the government, and the service was launched in major divisional headquarters instantly. We have achieved one of the most remarkable milestones (if not the most remarkable) this year when we could launch a satellite in the space embedded with our Red-Green Flag and titled with the name of the father of the nation.

Yes, I am talking about Bangabandhu Satellite-1, the first-ever communications and broadcasting satellite of Bangladesh. On the 11th of May 2018, a ‘SpaceX-Falcon 9’ rocket started its journey carrying the ‘Bangabandhu Satellite-1’ and the dream of an entire nation toward the space from the Kennedy Space Center, Florida, United States. The history was made. With the view to bring discipline to the ISP sector, the government has finalized the licensing guidelines for ISPs on 15-Dec-2020. The new guideline will help to make the internet services more customer-oriented and pave the way for the operators for innovative services which will help to build Digital Bangladesh. To further boost internet penetration in the rural area, the government has finalized a uniform tariff for broadband internet service across Bangladesh on 06-June-2021 named “One Country, One rate”.This will allow rural consumers to enjoy their connection at a rate that is currently only available to urban users. To implement this uniform tariff, the government has also fixed the tariff of private NTTN operators in August 2021.

The rates have different slabs, price floors, and ceilings for different types of customers and areas. To meet the growing demand for uninterrupted internet bandwidth, Bangladesh has signed up for a third submarine cable connection in Sep 2021 which is expected to be operations by 2024. It is estimated that by 2024, the country will need more than 6,000 Gbps bandwidth. To boost high-speed Internet access in the country, the government is going to launch Fifth Generation (5G) mobile network service by the end of 2021 and make it available in all districts by 2023. 5G has the potential to benefit everything from entertainment, gaming, education, and public safety. It will be transformative, fueling innovation across every industry and every aspect of our lives." But, I can assure you that the history of the development of the internet in Bangladesh is not going to be ended very soon. Maybe in 2121, someone like me would start writing an article with the same title. And at the end, he/she would express the same optimism, as me, that the history of the Internet in Bangladesh is not going to end very soon.